To: Senator Tom Warner
By e-mail

We do not comment on document preservation requests or specific communications with law enforcement, even where it would be convenient for public relations purposes to do so.

We have this policy in order to preserve the confidentiality of law enforcement investigations, and to encourage law enforcement to feel comfortable contacting us in emergency situations or to request the preservation of documents. We hope you will understand why we do not make an exception to this policy here.

We will action promptly any document preservation request we receive from federal law enforcement as and when it arrives. Per our policy we will not comment on specifics of what communications we may or may not have had in this regard. If you, your staff, and/or any other person are aware of specific content on our platform which is pertinent to this request, please contact federal law enforcement who will contact us.

By way of further background about our company, Gab exists to promote freedom of speech, by which we mean all speech which is protected speech under the First Amendment of the U.S. Constitution. No more, no less.

Accordingly we have a zero-tolerance policy towards threats of violence and unlawful speech. As to controversial but nonetheless legal speech we believe, as Justice Brandeis did, that “sunlight is the best disinfectant, electric light the most efficient policeman.”

We have been boycotted by virtually every company in Silicon Valley because of our adherence to this moderation policy. In their zeal to bend to “woke” political agendas or outside pressure groups, our contemporaries in the Valley forget the social importance of letting off steam and of exposing bad ideas, and bad people, to public scrutiny.

As we are a free to use online publishing platform, it is inevitable that criminal actors will seek to abuse our services, as indeed they abuse all online services, including Facebook and Twitter. We work hard to ensure that our services are denied to these bad actors.

For example, in the lead-up to the inauguration, we were made aware of a number of accounts which sought to spread division and fear through the use of unlawful threats. All accounts of this type that have been discovered have been banned on discovery, including at least one account which published threats against a number of U.S. election officials and was the subject of significant media coverage, including media coverage which incorrectly stated that we failed to take action against the subject account.

The Valley’s ongoing boycott of our company makes the job of stopping bad actors considerably harder. We have written to Google, Microsoft, and other companies in the Valley to advise them that their shortsighted boycott – one motivated by partisan political considerations and pressure campaigns – has had the side effect of denying us access to technologies we need such as PhotoDNA.

We have also contacted industry consortia such as Tech Against Terrorism to try to explain our approach to content moderation. The industry’s response to our entreaties has been stone cold silence. So we forge on, alone, doing what we can and innovating as much as we can to keep our rapidly-growing corner of the Internet safe.

We are cognizant that, in the wake of this incident, the Democratic-controlled Senate is likely to examine regulating platforms such as our own. We strongly encourage you to not believe the vicious smears you might read about Gab which our partisan detractors in the media, who want to abolish American-style free speech, frequently publish. We care greatly about ensuring that our platform is not used for unlawful purposes.

Your reform efforts would be best focused on enacting measures that will make it easier for smaller tech platforms to communicate clearly with law enforcement in emergency situations, something which is currently done, at least in our case, by e-mail or online tip form, and to not focus on measures that would make it impossible to do business and ruin American competitiveness, such as potentially disastrous proposals to repeal or modify Section 230 of the Communications Decency Act.

We are confident that, as we grow, we will continue to improve our abilities to moderate our platform appropriately and provide data to law enforcement in a timely fashion while still respecting our users’ privacy rights, as well as providing what appears, after this week’s events on Twitter, to be the last place on the Internet where the First Amendment exists. 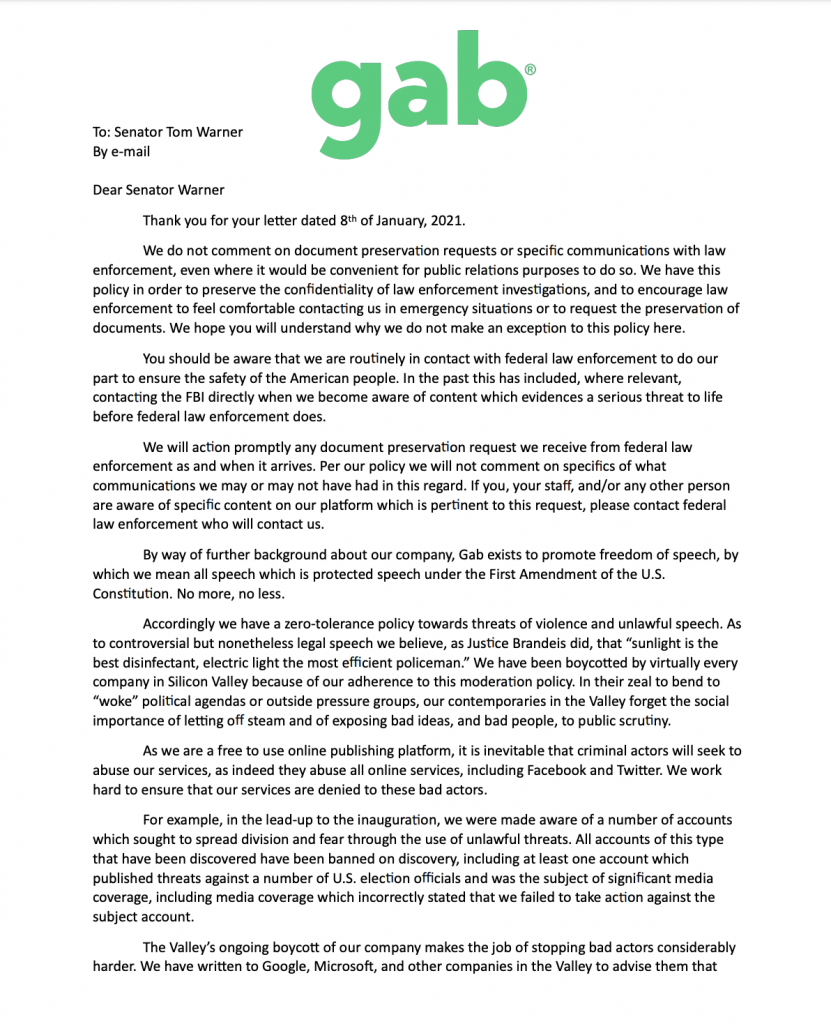 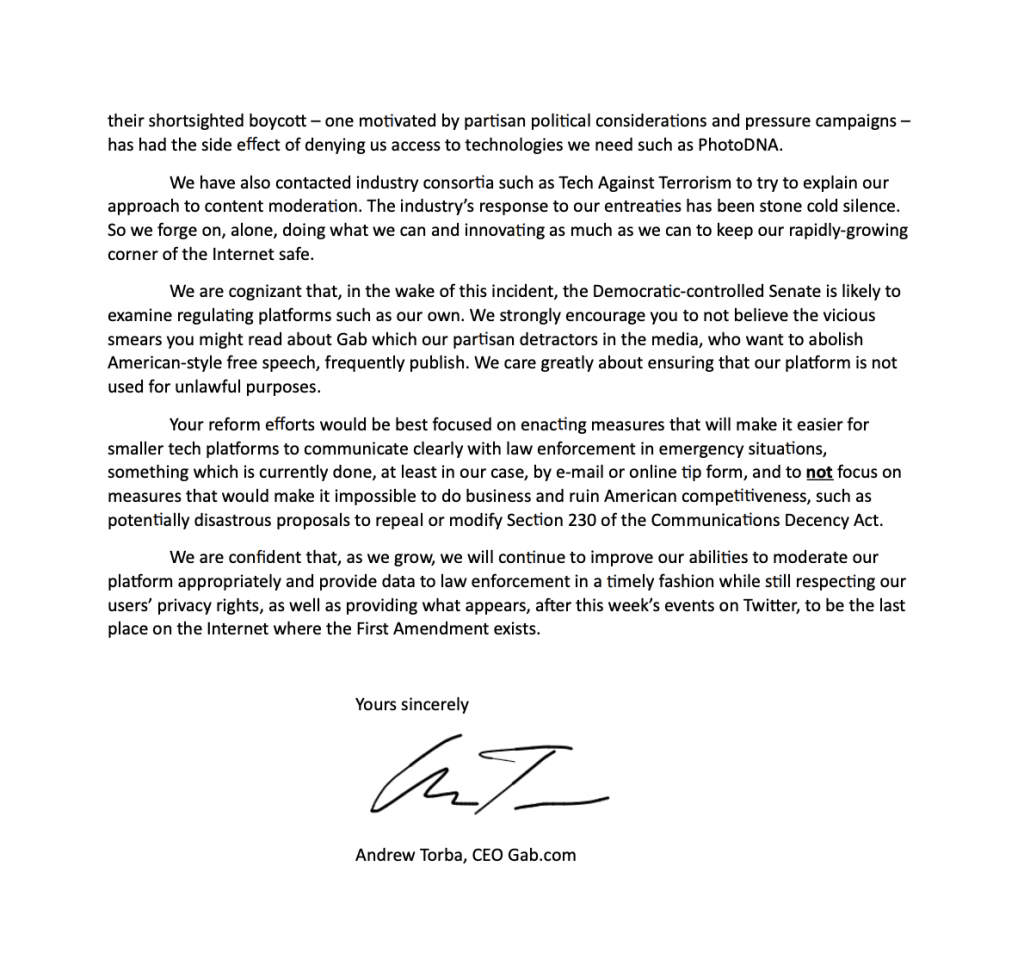 Ep 2532b – Year Of The Boomerang, Biggest Scandal In American History, Treason